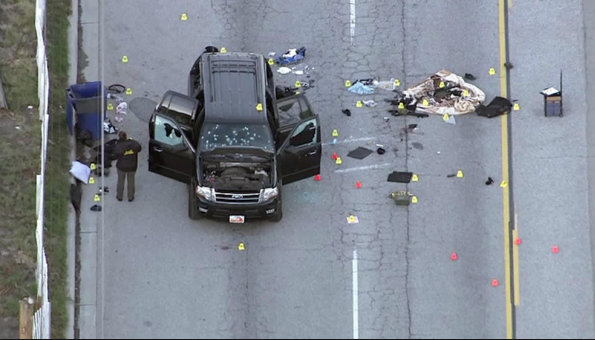 Splashed across every online news outlet “San Bernardino Shooters Syed Rizwan Farook 28 and Tashfeen Malik 27 Shoot and Kill 14 Injure 21. One Suspect still on the loose” Dec. 2, 2015 10:59 am PST, at the Inland Regional Center in San Bernardino CA Dept. Health Training Event and Holiday Party, (rented by an outside private 3rd party) with approximate 80 employees in attendance including Syed Farook. 3 shooters, Farook and Malik and a 3rd unknown assailant, wearing non-armored black tactical outfits and ski masks and armed with military-style semi-automatic pistols and rifles opened fire on attendees. After the shooting, the couple fled in a rented SUV. San Bernardino SWAT team was conducting its monthly training exercise a few blocks away and was able to arrive within 14 minutes wearing protective gear. The gunfire lasted under a minute before both perpetrators were killed.

I’m not a conspiracy theorist and coincidence is not conspiracy, but I believe this was a FALSE FLAG: Two days prior to the shooting SWAT announced “Victor Valley College officials would like to inform students and area residents there will be an “active shooter” training exercise on the VVC campus on Monday, November 30th. There will be significant police presence at this time.”

I find it highly suspect SWAT was suited up and ready to go and still training 2 days later, AND when did police begin training with live ammo? They don’t! How many vehicles are needed in a training exercise? There were an unprecedented number of governmental vehicles, around 400 on the scene (many federal).

As for news coverage MSNBC reported “It looks like the 3 actors” and “the 3 actors have been caught”, When has mainstream media ever labeled a suspect an actor or were they speaking literally or figuratively? When it’s consistently repeated, no they don’t.

Sally Abdelmageed works at the Inland Regional Center saw the attackers enter the building “three men, dressed in all black, military attire with vests on holding assault rifles and one of them opened up the door to building three… “and he… opens up the door to building three and … he… starts to spray, shoot all over into the room… I couldn’t see a face, he had a black hat on (mask) and uh, from my view all I could see was a black hat (mask) and long sleeve shirt… black cargo pants with zippers on the sides, big puffy pockets, he had a huge assault rifle and extra ammo… I just saw three dressed exactly the same…. their skin tone looked white. They looked like they were athletic build. They appeared to be tall.”

There are a couple of problems when it comes to the police version. It was broadcast for everyone to lock their doors and stay inside; then police announced they’d caught a “suspect” and subsequently let him go. That would mean the third man is still at large, running loose but he’s no longer mentioned, he’s just been forgotten, swept under the rug like there was no 3rd person. Then there’s Tashfeen Malik who wasn’t male, athletic, or tall. Tashfeen was short, small and only weighed 90 lb.

By Dec. 4th the house had already been cleared by the FBI. Since when does law enforcement wind up an investigation in 48 hours and leave evidence behind? And for that matter who leaves their social security card, driver’s license and passports out in the open? Coincidentally ALL terrorists just happen to leave important documents sitting out in the open, just lying around and FBI wouldn’t remove them for processing. Yeah, right.

The Macy’s card on the table would be documented and numbers run to see what was purchased. The Quran would have been seized to check for fingerprints, notes, or highlighted passages AND it was conveniently printed in English. Photos of friends and associates weren’t questioned – what if they were in on the shooting? Its common knowledge shredded documents are confiscated, taken to the lab where countless hours are invested putting bits of paper back together like a jigsaw puzzle, yet a trash basket was partially full and the scanner which captures and stores images indefinitely were also left behind. The FBI examines crime screens with a fine tooth comb because everything in that apartment is EVIDENCE but there was no fingerprint dust on the walls or any of the furniture. Real law enforcement collect of hair, body fluid, and fiber samples, meticulously cataloging everything, then transporting the evidence back to the lab where Forensic Scientists run tests. Law Enforcement wouldn’t leave a residence unsecured for anyone to access; more often than not forensic personnel would go back for a second, third, fourth and even more times check to make sure nothing was missed yet “Inside Edition” was able to pay $1,000 to landlord Doyle Miller who used a crowbar to open the door and allow reporters and photographers inside. Eyewitnesses claim the landlord was whisked away in an FBI van immediately following media departure.

I also find it odd that Michael Wetzel’s (man with 6 kids) wife Renee learned of the shooting she immediately alerted the Facebook support group which she belongs. Celia Behar the co-founder opened a GoFundMe account stating “She (Renee) started crying” “She just felt so much relief that there was such a cushion.” Common, whose first reaction to the death of their husband would be to get on Facebook? And in the photograph CNN publicized, what’s going on with the daughter in the pink dress? Her arm around her brother looks nothing like her other arm! Bad Photoshop?

Gunmen enter into known gun free zones and while it does make for a compelling argument, the advent of crisis and guns leads to an even bigger melee if the average Joe/Jane carried. It’s very apparent these shootings are less random and are actively being planned in order to traumatize the public into thinking the state can only protect us with their militarized police forces because our own guns and self-defense skills won’t neutralize an active shooter.

Media calling “suspects actors” and ignoring the missing 3rd gunman allows me to recognize the telltale signs media has played into, and are even party to in these hoaxes knowing full well they’re protected by H.R. 5736 section (b) “Dissemination of Information” legalizing propaganda published by mainstream news as long as there is the possibility at least one non-US-citizen will eventually read it. 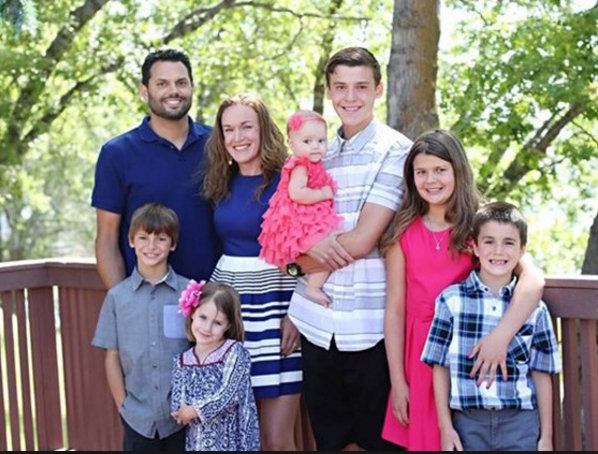